Do You Know: Proboscis Monkey 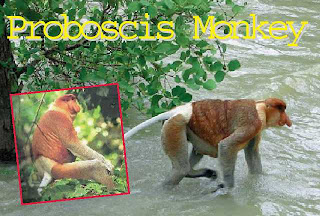 The Proboscis Monkey, Nasalis larvatus also known as Longnosed Monkey is a reddishbrown to greyish white in colour. It is the only species in monotypic genus Nasalis.

The monkey’s distinctive trait is the male’s large protruding nose. The purpose of the large nose is unclear, but it has been suggested that it is a result of sexual selection. The female Proboscis Monkey prefers big-nosed male, thus propagating the trait.

Males are much larger than females.

The Proboscis Monkey has a large belly, as a result of its diet. Its digestive system is divided into several parts, with distinctive gut flora, which help in digesting leaves. This digestive process releases a lot of gas, resulting in the monkey’s “bloated” bellies.

A side-effect of this unique digestive system is that it is unable to digest ripe fruit, unlike most other simians. The diet consists mainly of fruits, seeds and leaves.

The Proboscis Monkey is distributed and endemic to the coastal mangrove, swamps and riverine forests of Borneo. It lives in small groups of 10 to 32 animals. Group membership is very flexible, and they are known to move from group to group quite often.

Like other similar monkeys, the Proboscis Monkey climbs well. It is also a proficient swimmer, often swimming from island to island, and has been picked up by fishing boats in the sea, a mile from shore. While wading, the monkey uses an upright posture, with the females carrying infants on their hip.

Troops have been filmed continuing to walk upright, in single file, along forest trails when they emerge on land, the only non-human mammal, with the exception of gibbons and giant pangolins, known to use this form of locomotion for any length of time.

Due to ongoing habitat lost and hunted in some areas, only about 7000 are known to still exist in the wild in Sabah. In Sarawak, the population of this species has declined from 6500 in 1977 to only 1000 in 2006. The Proboscis Monkey is evaluated as Endangered on the IUCN Red List of Threatened Species. It is listed on Appendix I of CITES.