Do You Know: Monkey Cups 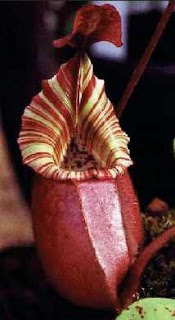 The Nepenthes or Monkey Cups grow in many parts of South East Asia but the greatest diversity is available on Borneo and Sumatra. There are many endemic species in these two locations. Many of these plants thrive in the lowland where it is hot and humid, but most grow in montane areas.

A few are found in alpine areas. The Monkey Cup, called ‘Kukuanga’ in some Kadazandusun dialect has shallow roots and climb on other plants around it. It can grow to several metres long. The petioles that look like a leaf ends in tendrils are used to grip on to other plants nearby. The tendrils will end in a nub that develops into a pitcher.

This pitcher will expand to form a tube like container that acts like a trap for its food. Food for pitcher plants includes insects and small animals like rodents. One of the most famous Nepenthes found in Sabah is the Nepenthes Rajah. It is believed to be the largest pitcher plant and different from the others in that it is a shrub. They are found in Mt Kinabalu and Mt Tombuyukon.

It is believed that Nepenthes of the Nepenthaceae family contains about 80 to 100 species.Other species found in Sabah are Nepenthes albomarginata, albomarginata ampullaria, bicalcarata, edwardsiana, fusca, gracilis, lowii, mirabilis, rafflesiana, reinwardtiana, tentaculata and villosa.

In the 60’s, large ‘Kukuangas’ were found in our background, even in my village in Inanam. There were as large as two hands. Some of the children then liked to take the sticky substance inside the cup and oil their hair with it. It is supposed to help hair growth and darken it.