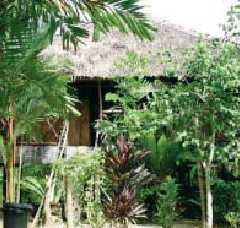 Monsopiad Cultural Village is a small enclosure in Kg Terawi Penampang about half an hour drive from Kota Kinabalu. The village is built nearby a river, that flows lazily through; its bank overgrown with tall grass, bamboos and various types of shrubs. Within the enclosure, there are several huts that house artifacts unique to the Kadazan people of Penampang.

As soon as you pass the main gate you will see a house that is built of bamboo, wood and thatched with sago palm leaves. Upon entering this house, you will see a kitchen used by the people in the past, as well as cooking utensils.

Go down behind this house and you will see utensils for pounding rice. Visiting Kadazandusuns will definitely have a feeling of déjà vu when they see these implements of yore. 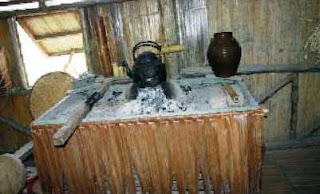 Take a walk behind this house and you will find an open space, where one lone house stands. On the compound, you will see a sago processing ‘plant’. I mean really. The sago pith is placed on a dais with a grater on top. In the past the sago pith was grated finely and pressed for its sago. The sago is eaten as supplementary food; made into an edible gummy substance called ‘nantung’ or ‘ambuyat’, dried fry on a wok like a pancake and many others.

The pith when unused is also allowed to rot. When it starts to rot a certain type of beetle will lay eggs on it. These eggs grow into large grubs called ‘butod’ and are considered a delicacy by the Kadazandusuns.

Some traditional games utensils are also available there, such as ‘rampanau’.

There is a nice house located in this area. This house boasts ceramic jars, sets of gongs and cooking implements. 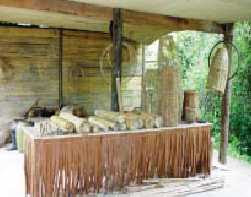 Awad Bajerai, the Operations Manager says the house is very basic but if anybody wants to stay there and experience the ambience of a Kadazan village, they can stay for a night.

“We cannot accommodate too many people though, maybe a couple at any one time,” he stresses, adding that his staff have to be informed a couple of days in advance though.

A few months ago, I was in West Malaysia, visiting an off-spring. Needless to say, I toured with her to her many in-laws (!) all the way from Selangor, Negri Sembilan and Melaka. In every visit they would ask about Sabah.

One of the questions posed was about head hunting and if they can see the mementoes of the ancient custom. I enthusiastically told them about the village and the House of Skulls.

The House of Skulls, is where all 42 ‘trophies’ or heads won by the warrior Monsopiad during his heyday. They hang from the rafter of a house which is cared for by one of the warrior’s descendent Dousia Moujing.

If you are not familiar about Monsopiad, the warrior, well, it is said that Monsopiad lived in this area a long time ago, maybe about three hundred years ago. He was bestowed with special powers when he was a baby. 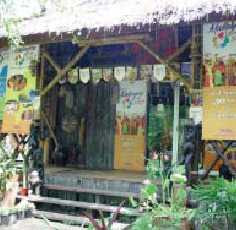 Actually he was born in a village, called Kuai, which often became a victim of plunderers due to insufficient warriors. Monsopiad took the challenge and with three boys, he sought out the robbers. A battle ensued when he found them and Monsopiad managed to behead the leader, witnessed by the three boys.

He was later given a warrior welcome. The village was later named after him. The rest is history, so they say. You can get the full unabridged version from documentaries on Monsopiad in the village.

To ensure that this legend does not die down, Awad and his colleagues, is ensuring its perpetuity through tourism. Interest by youth in Monsopiad will be kept alive through the cultural village while ensuring that tourists get an in sight in the people’s ancient way of life. 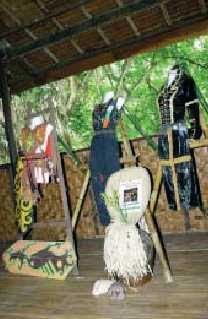 Nowadays, visitors will be treated to cultural dances such as the Sazau Penampang and warrior dance Angalang/magunatip as well as a tour of the village.

So get your tourists and friends to visit the village, the experience will surely be exhilarating for them.