My trip to awesome Temburong Brunei 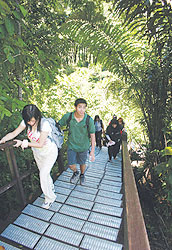 Trekking up the 1226 steps to the canopy walkway 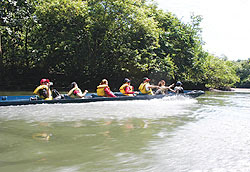 Going up the Belalong river in a longboat 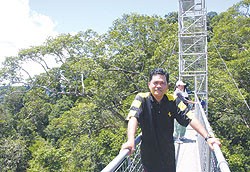 High in the tree tops on the canopy walkway

Photos courtesy of and Copyright to Azz and Brunei Press Sdn Bhd.
By Azz

On July 29, I embarked on a journey where I came face to face with nature and the outdoors. Oh well, I'd better bring some chocolate along! Trekking and swimming through the jungles and rivers of Belalong, Temburong, may be a daunting task, but if it's with the most rowdy bunch of co-workers that you've ever worked alongside, it's like putting the "wild" in wilderness. So that's how it was, wild, fun, tiring, shocking, and last but not least, the most unbelievable team-building activity that I've ever been involved in.

Forty staff members and employees of BAG Networks, and of course interns like me, made the 45-minute boat ride from the jetty just off Kianggeh Food court in Bandar to Temburong town at 7.00am. But before boarding the boat, a head count was required to ensure that no one is left behind. To make life easier, all of us were divided into five teams of eight, where I happened to win the coin toss of becoming the team leader.

Our team name, "Team Laksa Mana" ("Where is the Laksa Team") was derived from my fascination with the title "Laksmana" and my mispronunciation of the title. So as all eight members of Team "Laksa Mana" boarded the boat along with the other 32 staff members and employees, I began to wonder if we are all properly prepared for the expedition that we were currently in the midst of. All I brought was a couple of Mars bars, two bottles of water, a mini towel and an extra change of clothes. The others packed pretty much the same things, minus the chocolates.

It took only 20 minutes into the boat ride and I could already see that some people were falling asleep and were bored. So to liven things up, Peter, the leader of the Tech Team at BAG Networks, decided to make everyone join a singing activity. His choice of song was "We Will Rock You" by Queen that was led by him and everyone else joined in by clapping and stamping their feet. When it was my turn, I made everyone sing the "If you're happy and you know it, clap your hands!" song (it was the only song that came to me at the time). Thank goodness the boat ride was only 45 minutes, because if it were any longer, I would've had to jump overboard due to the lack of melody in our singing, to say the least! After disembarking from the boat at the Temburong town jetty, we straightaway got on the buses that would take us to the organiser's rest house, which happened to be the trip's medic's house! After a quick briefing and a bite to eat, we were all given life jackets before getting on the bus again to head towards Belalong. I was already eating my third Mars bar by then!

The bus ride took around 15 minutes, and after arriving at the drop-off point, we had to take longboats up the river in groups of six. I, along with five others, was unlucky to board a particular longboat, which had a dodgy motor and kept on dying on us every 10 minutes. It was rather annoying because all the other boats that left after us kept on passing us by. After the upstream trip 12km, we finally arrived at the Ulu Temburong national park entrance, and what a sight it was, a huge camping facility where it was built along the river and halfway up the tree line.

From there, we would leave our life vests and trek up to the summit of the Canopy Walkway, which happened to be around 1226 steps from the base of the camp to the entrance of the metal staircase of the canopy walkway. The 1226-step trek up through a sloped jungle required a lot of teamwork and also a lot of support from one another so that no one is left behind. You tend to find out more about your team-mates through teamwork, and I find that you also get to know more about yourself. Like how you handle a team member who complains a lot, slow, or is just a pain in the lower back. We did reach the summit in the end, but not exactly in record time.

Up the 60-metre canopy walkway above the treetops awaited a sight to behold: nothing but dense jungle everywhere and high flying birds. Be careful as you walk up the canopy because the metal rails can get quite hot. How can climbing up the canopy walkway be complete without a few screams and shouts from the highest point of the canopy? It was nice to hear the echoes of my name proclaiming my ascent to the top of Ulu Temburong national park.

The trek down the summit was a lot easier as we took a different and less rough terrain route back down the entrance of the Ulu Temburong national park. It was almost lunchtime and our stomachs were grumbling like mad. But before we could eat our lunch, we had to get to it first. This was where the fun began! We were told that our lunch was somewhere down along the river, and that the only way to get to it was by jumping into the river and floating downstream until we reached a bed of rocks with our lunch on it! So after putting on our helmets and strapping on our life jackets, we jumped in and floated downstream.

Personally, I found it amazing that I was actually floating down a river in the middle of a rainforest. This was a huge surprise for me because initially I thought that we couldn't get into the river due to crocodiles and snakes. But after floating down the river for 20 minutes, there was nothing to be afraid of because there wasn't anything in the water, other than the rocks that we kept on running into. Even though they were smooth and round, they were still rather painful to rub against.

Coming ashore to the bed of rocks after the 30-minute float down stream, lunch was served. After lunch, came a small navigation activity where each team would have to navigate through dense jungle to reach a particular waterfall. Even though each team was given different directions and bearings, we ended up merging as one big team of 40 to go through the dense jungle. Lots of shrubs and of course my favourite "Batang Duri" were in our way of getting to the waterfall. I remember running like a madman towards the waterfall when I saw it from afar, pushing everyone out of the way and jumping into it because it was so refreshing and cooling, especially after the last 30 minutes of trekking through the rainforest. The next activity lined up for us would be another wet one, but that is another story.

Courtesy of Borneo Bulletin Weekend
Posted by e-borneo.com at 6:00 PM