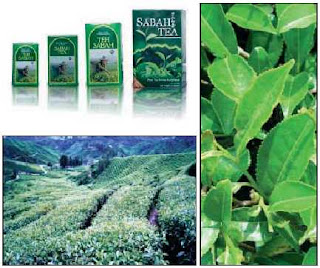 Sabah tea is one of Sabah’s very own products. It is acquired from the Sabah Tea Plantation, which is sited in Kg Nalapak, Ranau. The plantation is on a 6,200-acre land, sited at 2,272 feet above sea level.

There is a beautiful rainforest around it, believed to be about 130 million years. The plantation is the single largest commercial tea plantation in Borneo. The tea planted there is the Camelia Sinensis.

Actually Camellia sinensis is just the tea plant, a plant species whose leaves and leaf buds are used to produce tea.

Most of us may hear of or talk about White tea, green tea, oolong and black tea and think that they come from different plants’ leaves. They are however all harvested from Camelia Sinensis, but are processed differently to attain different levels of oxidation.

Camellia sinensis is native to Southeast Asia. Nowadays however they are cultivated all over the world especially in tropical and subtropical areas.

The shrubs are usually trimmed to a short four feet tall, at least the ones in Nalapak so that it is easier for the workers to pick the leaves.

There are medicinal values in tea leaves and have been used in traditional Chinese medicine as well as other medical systems to treat asthma, bronchodilator, angina pectoris, peripheral vascular disease, and coronary artery disease.

Sabah tea sold in loose or sachet forms, are available in most supermarkets and grocery shops in Sabah.