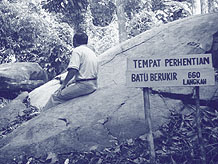 Sign reads 'Another 660 steps to go before reaching the carvings'. A visitor can be seen taking a rest. 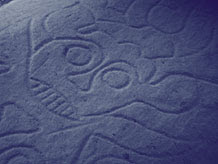 The carvings on one of the rocks portray the image of flora and fauna.

Lumuyu Rock which is a half an hour drive from Tenom town still remains a mystery.

It is located on a hill, which was first discovered by villagers of Kampung Ulu Tomani, Tenom in April 1971. They came upon it while clearing a hill for farming. In 1976, Sabah Museum built a shelter to protect the rock carving and in 1979, it was replaced with a new shelter in order to preserve the nine-metre long rock.

Since then, the rock has managed to attract both local and foreign tourists. It has become one of the tourists' hot spots in Tenom. It takes about half an hour to reach the place via a small district called Kemabong.

Efforts have been made to make the place more attractive. Promotional steps are underway in order to popularise the location as a famous tourist hot spot. The route leading to the rock has been improved. Two museum personnel are being stationed to look after the location.

According to the stories related by villagers of Salilir, the rock is six generation old or more than 150 years old.

According to legend, there used to live seven brothers in Kampung Salilir Ulu Tomani, Tenom who possessed supernatural strength. The youngest brother was to be the most outstanding. Kalawon Kelala, who was a very powerful man was particularly jealous of the youngest brother and plotted to kill him.

One day, Kalawon Kelaka managed to kill him and his death was to be announced to the villagers. It was a great lost to them as the younger brother was very helpful to them in flattening the hills by throwing rocks taken from the river.

The six older brothers became so sad and they expressed their sadness by making carvings on the rocks. Day by day, they managed to illustrate their sadness into a carving which are abstract on the surface of the rock that can be found in many formation. Today, no one or even the villagers nearby could interpret the meaning of the carving.

The carving could be in the shape of the face of human showing the hands and feet or in the form of animals or flora and fauna.

Various researches have been conducted by museum personnel but they failed to interpret the meanings behind the carvings. Furthermore, the nearby villagers especially the new generation could not recalled the true story behind the formation of the carvings.

Getting to the rock carvings would be a great challenge to many people. One need to walk up about 28 minutes or 1,535 steps from the main road of Malutut Village where an interesting view awaits visitors. One has to pass by a paddy field and along the way, visitors would be able to find green local vegetation such as rubber tress (Havea varassilliansis), durian trees (Durio zibethinus), langsat trees (Lansium domesticum) and some other local plants inhabiting the surrounding area.

Apart from the old highway between Kota Kinabalu to Tenom via Tambunan, the newly link road between Sipitang to Tenom and Kimanis to Keningau will help visitors access the location more easily.

Email ThisBlogThis!Share to TwitterShare to FacebookShare to Pinterest
Labels: Tenom