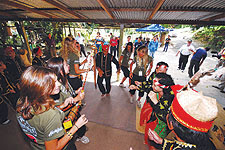 Joining the local community in a dance 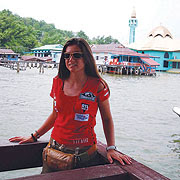 Benedetta Delogu posing with Kampong Ayer as the backdrop 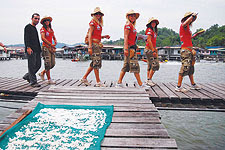 Walking on a jetty at the Water Village

As part of their Asian tour, the Donnavventura visit to the Sultanate to promote "Brunei Eco-tourism" to television viewers in Italy not only provided them with an informative adventure and a taste of the local culture but also fond memories during their brief but busy trip.

The team arrived last Monday to a warm welcome at the Sg Tujoh Control Post and toured numerous places of interest to learn about the culture and people of different ethnic groups.

The team made quick stops at the Billionth Barrel Monument and Tasek Merimbun, the largest lake in the country, and met with the Dusun community there.

They continued their adventure in Temburong District for a visit to Batang Duri and a longhouse as well as a "Temuai" ride down the river to Ulu Temburong National Park where they spent the night in a chalet.

Joint organisers, Brunei Tourism Board and Goh Hock Kee Motors, have done a great job in making the Donnavventura visit run smoothly and showed how the government can cooperate with the private sector in promoting Brunei to the world.

Courtesy of Borneo Bulletin Weekend
Posted by e-borneo.com at 9:19 PM