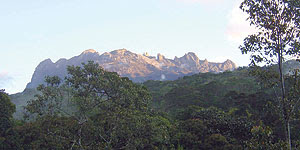 The majestic Mount Kinabalu is the pride of Sabah, the Land below the Wind

Among the flowering plants in the park 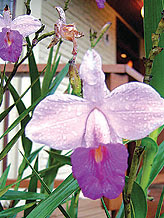 One of the thousands of orchid species found in the park 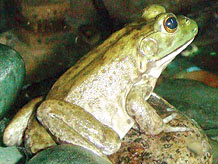 One of the many species of frogs

Kinabalu National Park was established as one of Malaysia's premier national parks in 1964.
Playing an important role as one of the most important biological sites in the world, UNESCO selected it as the country's first World Heritage Site in 2000.

The park spreads over 750 square kilometres and is located on the west coast of Sabah.

Park headquarters is located at 1,588 metres and provides accommodation such as hostels, lodges and chalets.

A number of restaurants and exhibition centres are located in the vicinity of the park.

The temperature varies from 20 degrees centigrade to 13 degrees as evening approaches.

The most suitable time to visit the park is from March to April, during the dry season.

The average rainfall can exceed 400 cm per year and the temperature at night can drop below freezing point especially at Laban Rata, half way up to Mount Kinabalu.

The park is blessed with such beautiful flora that you can't help but stop at every blossom to snap a memorabilia. There are more than 1200 types of orchids found here.

The unique carnivorous pitcher plant is also one of Kinabalu's endemic prized possessions.

They prey on insects by secreting alluring nectar. It is documented that more than nine species of pitcher plants grow here.

The world's largest flower, the red Rafflesia can be found here if you are lucky enough to spot one. It is beautiful to look at but has a pungent smell. It wasn't such a surprise to learn that it really is a parasite.

It can grow to three feet wide. It does not have any leaves, stems or even a root. The unique plant can only be found in the rain forests of Sumatra and Borneo. Almost extinct, it is protected by law.

The park's system of trails allows visitors to make the most of their visit, with trails ranging from less than an hour to four days in length.

The wide altitudinal range covered by the park means that a large number of different habitats and forests types are found within its environs, from lowland diptherocarp forest where only little light can enter, coniferous forests, alpine meadow and of course the stunted bushes.

Some of the richest montane oaks grow here. To date there are more than 40 different species recorded.

As for fauna, residents include orang utans, gibbons, ant eaters, sun bear, the grey and the red leaf monkey, tarsier, ferret badger, more than 200 species of birds, various types of strange insects, 200 species of butterflies and over 100 types of macro moths.

There are more than 60 amphibian species of frogs and toads, which have been recorded and 40 species of fish. There are about 90 species of lowland creatures and around 22 montane mammal species.

Few landmarks have dominated the landscape in any part of the world as much as Mount Kinabalu does over Borneo. The majestic Mount Kinabalu is the pride of Sabah, the "Land below the Wind".

The mountain came into existence less than a million years ago when a plutonic rock forced its way upwards through sandstones of the Crocker Range due to winds and torrential rain. However, the youngest non-volcanic mountain is still growing at the rate of five mm per year.

The mountain was first climbed by Sir Hugh Low who collected many of Kinabalu's unique plants.

Today's research is directed towards the conservation of this magnificent mountain and its remarkably rich biodiversity.

Climbers are assisted by steps hewn from rocks and ropes placed at strategic points. Hence some 30,000 people annually are able to scale Southeast Asia's highest peak at 4,101m (13,455 ft).

The climb to the top takes about two days so you will have to acclimatise over night at Laban Rata at 10,700 feet. You will need a guide to go all the way to the top.

Enjoy the stunning and breathtaking views during your climb.

However, for those who don't intend to reach the frost covered rocky summit, you can go trekking in the foothills. For time out to unwind, head to the open air sulphur health spa, Poring Hot Springs, located 43km away from the park.