Tales for Tourism in Sabah 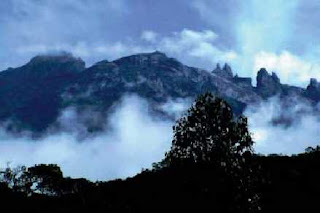 Folklore s and legends can be promoted as tourism products. They are after all an essential part of the people, notably the Kadazandusuns, as their way of life and belief are based on these ideas. In the olden days it was even stronger and influenced their daily life, than it is now.

Those involved in the Homestay programme should put some thought on this idea. The programme is after all designed to allow tourists to get closer and bring home a memory of a people instead of the ‘normal’ tourism products, such as stage performed dances.

When the people’s folklores and legends are shared, most tourists will understand and feel closer to their hosts.

There are many such tales that are of interest to tourists. The legend of Mount Kinabalu for instance is quite interesting, even though the tale may vary from one Kadazandusun tribe to another.

One of the many legends that is told and retold is the legend, or belief, pertaining to Mount Kinabalu. In the olden days, the people believed that when a person died his soul would go up to Mount Kinabalu to rest. In the mountain there is a gigantic portal that led to the other-world. The soul would pass through and never leave the place again unless summoned by powerful bobohizans (priestesses).

On the seventh day of a person’s death, his soul would be summoned for the last time and he would come and eat in his old house. After that he would be told that never again should he cast his shadow on the house again. His way in this world would be ‘closed’ by incantations and he would return to the other-world.

Never again would he wander to his old home unless called by the Bobohizans.

The more famous legend is of course the tale of Huminodun, Spirit of the Rice. The tale of Huminodun is chanted by Bobohizans every year. The incantation is long and varies from one Kadazandusun tribe to another. However, the essence is the same.

A long time ago, there was a famine, nothing grew on earth. So Kinoringan, the father of Huminodun went to look for food. Huminodun and her mother Suminundu waited and waited but he did not return. As a last resort, Suminundu, a great Bobohizan herself, went to the cultivation ground and invoked the elements as she slaughtered her own daughter.

“Your teeth shall be maize, your flesh shall be rice….” And so her body became various types of food plants.

Therefore every year, the people commemorated the event by holding the Harvest Festival.

There are many other folklores and legends that could interest tourists especially when they are in your homes as guests.

Even superstitions are interesting. These tales could be told in a positive environment for tourists, probably around a fire. The person relating the stories should however be articulate and knowledgeable so that tourists will understand the flow.

Food for thought there.