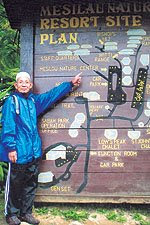 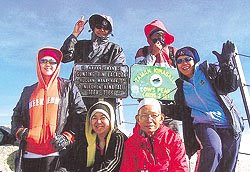 Climbing Mount Kinabalu is no ordinary feat. And for a 75-year-old Bruneian to do it is simply phenomenal - not once but twice in two years.

This was his second achievement following his first successful attempt in 2006.

"Age is not an obstacle to success. If there is a will there is a way," he told the Bulletin.

When asked about his preparation and fitness before going to Sabah, he said, "I used to do my normal jogging in the morning at Shahbandar Recreation Park in Jerudong two times a week."

He said this year the conditions were quite tough for him compared to 2006 because he lacked sufficient physical fitness due to the fasting month. After celebrating Hari Raya, the group went for the climb.

"I felt pain for two days after the climb but I'm alright now," he said adding that one needs to be fit before starting such an expedition.

He said this year they started climbing via the Mesilau Summit Trail and took 10 hours to reach Laban Rata from Mesilau, which others may take about five hours. They climbed for four hours in rainy conditions until Laban Rata (Guest Chalet), he added.

Haji Johar thanked the group for believing in him to reach the Mt Kinabalu summit. All the expenses for the expedition were borne by Awg Haji Johar. He is now looking forward to join any group to scale any mountain provided his fitness and health condition allow him to do so.

He advised the younger generation that nothing is impossible in the world if they have the self-confidence, which is the key to success.

Kinabalu Park is Malaysia's First World Heritage site and conserves one of the richest assemblages of biological diversity and spectacular natural landscapes in tropical Southeast Asia.

Courtesy of Borneo Bulletin
Posted by e-borneo.com at 5:46 PM