Even with today’s designer innovations, traditional handicraft has always been a part of the lives of Sabah’s peoples. From functional objects to decorative accessories, the various handicraft made throughout Sabah reflect the culture that they come from.

Baskets woven with tree bark, rattan and bamboo are still used by the natives everyday. They use the baskets to carry harvest such as fruits, paddy and other crops, as well as any tools that they need to take with them when they go out to work in a field or the jungles. Today techniques used for making woven baskets have been used to make contemporary products such as stationery holders, trays and decorative pieces for the home. Seen here is the carrier called “wakid“, a basket made by the Dusun/Kadazan people who live at the foot of Mount Kinabalu. The back carrier is cylindrical at the base and has a flared-out top. The body is made from pieces of carefully split bamboo that tightly fit at an elongated base. A pair of shoulder straps made either of woven split rattan or bark cloth complete the form and function of this basket. 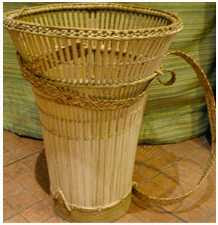 Beaded products made by the Rungus people from Kudat are especially known for their burst of colours and intricate designs. According to tradition, the patterns on the beads knit together represent special meanings and tell a story. Most Rungus beaded products are worn as a part of the Rungus traditional costume, as a loose band of beads worn crossed over the chest and back. Current pieces also function as deco pieces for the home and used as wall hangings. The beaded necklaces seen here are known as “pinakol”.

Fabrics with elaborate patterns and designs like the “tinohian” woven by the Rungus women of Kudat and the “kain dastar” made by the Bajau take months to complete and are consequently some of the most expensive traditional crafts there is to purchase. The “tinohian” is a heavily embroidered piece while the “kain dastar” is woven with great concentration to detail but they are both similar in that they are both worn on the head by the men of their respective makers. There are many more traditional textiles made by the Rungus, the Bajau as well as the other cultures around the state, each strongly expressing a different ethnicity. 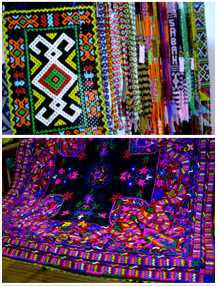 Leopold Stokowski once said, “A painter paints pictures on canvas. But musicians paint their pictures on silence.” The natives of Sabah too painted the silence with musical instruments of their own, crafting them out of bamboo, wood and animal skins. The “sompoton” seen here is a traditional Kadazan music instrument made by the Dusun tribes in Sabah. The “sompoton” is made of a double raft of eight bamboo pipes inserted into a dried gourd. They also made other wind, stringed and percussion instruments, including the gong, which is used widely today in any traditional musical performances. 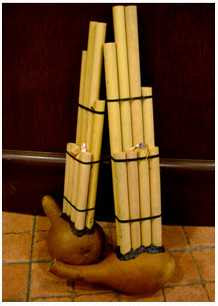 Other Traditional Crafts and Where to Get Them

There is an almost inexhaustible amount of crafts made by the local folk, like the tight-woven “rinago” baskets made by the Rungus of Kudat, the “tudung duang” made by the Bajau and various woven hats made by various ethnic groups of Sabah. The are also traditional tools like the “parang” and larger constructions like the “lepa-lepa” boats from the East-coast Bajau. All these and other crafts can be found at a “tamu”, the traditional open-air market found in various locations throughout the State. Check out page 25 for the locations and days that these “tamu” operate. Alternatively, these crafts are also available from the reasonable priced Kadaiku boutique in Kota Kinabalu, which sells high-quality traditional goods sourced through the local communities. Kadaiku is located at Lot 5, Ground floor, Block L of Sinsuran Complex.

NOTE: All Photos Copyright to Sabah Tourism
Posted by e-borneo.com at 6:39 PM

Hello, good day to you...i have something to ask about the basket made by rungos people in kudat, i want to buy it in volume..is it posible? i am also located at Kudat, but my buyer is in the philippines. please email me if in case you have something to tell about these. here is my email add anjelfro_one29@yahoo.com thank yuou in advance..