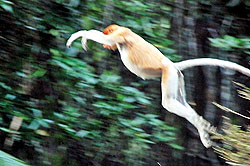 A proboscis monkey leaping between trees in Brunei. 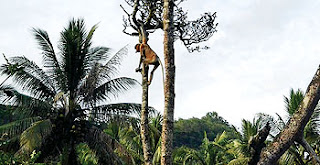 A proboscis monkey spotted in the Bengkurong area near a human settlement
trying to adapt itself to the different habitats and the environment
(the monkey is very rarely found alone; it does not come in groups as was once the case).

The mangrove forests in Lumapas with high-conservation value,
where proboscis monkeys were spotted in groups during feeding time in the morning.

Photos courtesy of and Copyright to Shavez Cheema and Brunei Press Sdn Bhd.

The proboscis monkey - or Bangkatan as it is locally known as - is only found in Borneo and risks extinction due to the continued destruction of its fragile mangrove and forest habitats.

The male species are most known for their large noses and big bellies.

The large, reddish brown monkeys are only found in the mangroves, swamps and the nearby forests of Borneo.

The males use their large noses to amplify their calls over long distances, as well as to attract females that not only have much smaller noses, but are only about half the males' size, too.

Groups of proboscis monkeys can contain up to 28 monkeys.

However, there are often only around 12, either made up of only one adult male or all adult males.

These monkeys feed only on leaves, seeds and unripe fruits they find in the mangroves and forests, and spend a large portion of their time resting, as digestion of these types of food takes a long time.

The easiest way to spot these spectacular monkeys is either early in the morning just as they wake up or as they prepare to go to sleep in trees along the banks of rivers.

The International Union for Conservation of Nature (IUCN) lists these monkeys as endangered, as numbers are falling due to hunting and destruction of their mangrove and forest habitats.

However, groups of these monkeys can be found in mangroves and forests not far from Bandar along Brunei's rivers in areas that are not currently under government protection.

Here in Brunei, proboscis monkeys can be found living in the Bengkurong, Brunei Bay and Lumapas areas. In fact, a recent survey carried out in Lumapas found that at least 15 groups of monkeys were residents in the area. These mangroves also provide homes for many other animals, including otters, crocodiles and eagles.

Even though this area is so close to the Bandar Seri Begawan and other areas of human activities, it is a large enough area of intact mangroves to provide a safe haven for the proboscis monkeys. Protecting it from destruction could be a large step forward in the fight to save a rare species.

One option for implementing such protection would be to include the Lumapas, Bengkurong and Brunei Bay Mangrove areas in the Heart of Borneo initiative.

The Heart of Borneo initiative is a collaboration between the governments of Brunei, Malaysia and Indonesia that aims to conserve the extraordinary bio-diversity found on Borneo.

To do this, a network of protected areas and sustainably managed forests has been put in place that covers approximately 220,000km², a vast area that allows wildlife to move between different habitats and groups of animals to interact.

The inclusion of the Lumapas mangrove area in the Heart of Borneo would provide protection to these monkeys and other resident animals by preventing the destruction of their habitats for development purposes and by stopping illegal hunting.

Sadly, such destruction has already occurred in Bengkurong, where the resident proboscis monkeys are trapped on one side by a bridge and the remaining mangrove trees are dying as a result of pollution.

In addition, the Heart of Borneo protection could be extended to other areas of suitable habitat along the river banks and further inland.

By doing this, a network of mangrove and forest 'corridors' can be maintained, allowing groups of proboscis monkeys and other inhabitants to interact.

This would ensure the monkeys have enough available area to forage and for the population to grow as well as being beneficial in reducing the risk of inbreeding and diseases within an area.

Protecting their sensitive mangrove habitats would not only help save proboscis monkeys but would also pro-vide an accessible area, so that people, locals and visitors alike can share in the excitement of seeing one of Borneo's endemic monkeys in the wild.

Courtesy of Borneo Bulletin
.
.
Posted by e-borneo.com at 6:16 PM