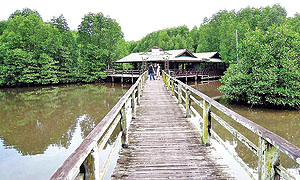 Kota Kinabalu Wetlands is a model wetland centre for the purpose
of conservation, education, recreation and research 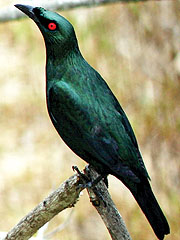 One of the residential birds, the starling,
has glossy black plumage and bright red eyes 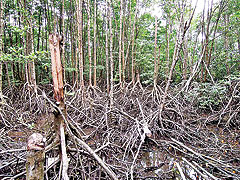 A pristine patch of mangrove in Kota Kinabalu Wetlands

Between the high and low tide marks lies a unique ecosystem that is regularly covered and uncovered by the ebb and flow of the tides. This meeting ground between land and sea is called the intertidal zone. It is rich in nutrients and oxygen and is home to a wide variety of organisms.

During my recent visit to Sabah, I went to Kota Kinabalu Wetlands situated just two kilometres north-east of Kota Kinabalu in Likas. Formerly known as Likas Mangrove and later Kota Kinabalu City Bird Sanctuary, this site is the only remains of 24 hectares of mangrove forest that once existed extensively along the coastal region of Kota Kinabalu. Today, it is used primarily as a model wetland centre for the purpose of conservation, education, recreation and research.

The visitor centre at the park headquarters is where tourists can enquire about information on attractions and activities available to them inside the park.

A 1.5-kilometre-long boardwalk adjacent to the information centre sheds light on mangrove forest and its brackish environment. Signs along the trail with drawings, photos and the history of the plants, birds and aquatic life that reside there, educating visitors on the economic and ecological importance of maintaining mangrove forests.

In addition, an observation tower allows visitors to view the tree canopy and observe birdlife.

During the cold months from the end of October to early February, migratory birds flee harsh winter in China and Siberia to find shelter in this resource-rich area, making the site a haven for birdwatchers.

To date, almost 80 species of bird have been identified at the sanctuary. Commonly sighted birds include migratory species like the Chinese egrets and herons as well as canopy birds such as collared kingfisher and stork-billed kingfisher. Other species available on view include plovers, magpies, starlings, painted storks, grey herons, cormorants, waterfowls and eagles.

In the past, wetlands were mostly considered to be wastelands - uninhabited areas useless for cultivation. This understanding has since changed, with the value of wetlands gaining increasing recognition.

Lush habitats like the Kota Kinabalu Wetlands continue to provide a haven and nursery for many species, some of which contribute to the food chain, increasing the population of fish for human consumption.

Acting as a reserve, these spots also allow previously barren sites to be re-populated again. Newly-found chemicals produced by some species like the horseshoe crabs, are proving to be invaluable in the search for new medicines and drugs.

Although efforts have started to allow for the regeneration of wetlands in Sabah, either through natural growth or active reforestation efforts, areas are still being cleared for various purposes, such as development of commercial and residential areas. Now, Kota Kinabalu Wetlands and a few other isolated spots of marine shelter are all that remain against a modernised and sterile coastline.

There are many reasons for protecting Kota Kinabalu Wetlands. For most visitors, stepping out on dry land in the middle of the open sea with the beauty of a thriving, teeming world beneath and uncluttered skies above, such an experience speaks volumes of its value.

Courtesy of Borneo Bulletin Sunday
.
.
Posted by e-borneo.com at 6:56 PM