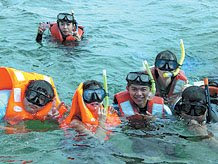 Snorkeling out in the open sea 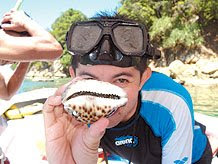 Holding one of the Caenogastropoda, Cypraea leucodon,
a type of marine snail that can be found around the coral 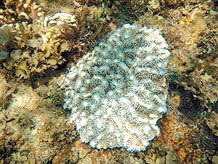 I am always amazed at the vivid colours of nature, especially the ones underwater.

Coral is one of them and their colours are usually stimulating and intriguing. Other beautiful, unique aquatic animals residing there never cease to impress me.

One of the many places where we can eyewitness such phenomenon is the Kuraman Island Resort.

We gathered at the Empire Hotel and proceeded to Scuba-Tech where we registered and filled liability release forms. Then the management provided us with snorkeling equipment and a short briefing since all of us were first-timers. Then we were ushered onto the boats which took us to Kuraman Island.

It was 9am and the sun, already brilliant white, was climbing rapidly into the sky. The journey to our destination took about 45 minutes.

Trust me, the high-speed boat ride was my least favourite part of the day. It felt like I was about to jump out of my skin!

Finally, we arrived at the Kuraman Island when suddenly a pleasant, tame dog, named, Joy, ran towards us... with a welcoming gesture! We could tell from its face. Everyone got off the boat with excitement and started to unpack our gear.

The weather was perfectly fine though the day promised a seething cauldron within the hour. The sky was blue and clear. The water was crystal clear and we could even see the seaweed and a few colourful fishes. Water resistant sunblock lotion is a must or you will be toasted by the blazing sun.

This was the perfect moment to take pictures and strike poses amid the blue sky, white tropical sandy beaches and bluish green sea. The scenery was unbelievably spectacular and magnificent. Its tranquility makes it a perfect place to unwind, away from hustle and bustle of the city.

As the excitement built up, the Scuba-Tech staff brought us to another island adjacent to Kuraman Island where we did our snorkelling. Safety precautions were briefed before any snorkeling activity started. So we eagerly set up ourselves, fully geared with snorkelling equipment and took the chance to drop ourselves into the water.

Clinging securely around my neck was an Olympus waterproof camera which can be used as deep as three metres without any worries of a camera malfunction. It enabled me to capture the beauty under water.

As we snorkelled, we could see the coral reefs but we were not really blown away as the visibility of the water, as I put it into scale, was only 80 per cent. The water was a bit greenish with some suspension but we still could see the coral and the fishes. But if you dive deeper and take a closer look, you can actually see that some of the corals in highly saturated colours seem almost pure in their spectral intensity.

Indeed, what fascinates me most about corals is that they are tiny animals, called polyps that are related to and look like sea anemones.

As for me, a coral reef is a tapestry of time and change as its simple structure has thrived since a very long time ago. These reef builders consists of a layer of living tissue overlying a hard skeleton made of aragonite, more commonly known as limestone. Each coral polyp sits in its own skeletal cup called a corallite.

Generation after generation, the coral skeleton builds up and out as the polyps make their daily deposits of limestone. The polyps divide as they grow and form coral colonies. As the colonies build up on top of each other, they gradually form a coral reef. Coral reefs may be many thousands of years old which form slowly over time and they can respond to changes in sea level, salinity of the water, temperature and other environmental conditions. The question is, will they make it against global warming?

In fact, a vast number of species inhabit coral reefs, making them second only to rainforests in species richness. This huge diversity is a result of careful sharing of a reef by all its inhabitants. More species of fish are found on reefs than anywhere else in the sea.

As I took a brief dive, the ambience was so silent. All you could hear was your heart beating and pulsing. It was the most calm and serene ambience I had ever experienced. Sometimes it can be a little bit intimidating when you are out in the open water but it was fun.

Lots of different types of corals can be seen underneath, both soft and hard corals as well as other aquatic animals and we do not even know their names! Other animals that we found were such as the starfish, clown fish and marine snail.

As our energy were drained spending about an hour swimming, snorkelling and diving, we called it a day and headed back to the Kuraman Island to have lunch which consisted of barbequed lamb, chicken, sausages, crabsticks, fried rice and drinks provided by the management.

After touring the island, we were ready to head back to Empire Hotel. Along the way, the Scubatech-Tech staff once again brought us to a different location for a second dive but only for about half an hour. As we arrived at Empire Hotel, we had our Banana Boat Ride since it was included in the package.

The whole trip was amazing and unforgettable, and we really enjoyed our super-fun Sunday vacation!