Sandakan was the former capital of British North Borneo from the years 1884-1946. As one of the largest towns in Sabah in the early years, traders from Europe to Africa, Arabia to China, the Indies to Java made Sandakan the hub of Sabah. After WWII the capital was transferred to Jesselton (now Kota Kinabalu). This month’s feature highlights Sandakan’s many wonderful charms.

Head out to the Turtle Islands Park, where hawksbill and green turtles go to lay their eggs after dusk. Pulau Selingan, Pulau Bakkungan Kecil and Pulau Gulisan are the three islands that make up the park, but Selingan Island, the largest of the three, is where visitors are welcome to catch sight of the amazing event of turtles nesting. Here is where the complete facility for turtle spies is located: the park’s headquarters, a visitors’ centre and a turtle hatchery makes Selingan the perfect place for you to learn about turtles and witness a turtles conservation effort. Turtles come ashore after the sun sets, so visitors can spend the daytime snorkelling in the pristine waters surrounding the island. Although turtles lay their eggs on the three islands all year round, the occurrence is more common between July and October when the seas are calmer. Arrange your visit to Selingan Island through a tour operator or through the Parks office for this eye-opening and awe-inspiring experience!

On top of the hill along the stretch of Jalan Istana there is a house with a story to tell. This British colonial government quarters called Newland, was once occupied by a famous American writer, Agnes Newton Keith, who wrote Land Below the Wind (1939), Three Came Home (1946) and White Man Returns (1951), written accounts of her life in Sandakan during and after the war. With the exception of the second book, Land Below the Wind and White Man Returns were written in the House on the hill where she had a view of the Sandakan Bay in the front and the Sulu Sea in the back. Destroyed during the war, the house is today restored and turned into a heritage house, providing interesting insights into life during British North Borneo. It is furnished with a reproduction of colonial furniture and antiques. A gallery on the first floor tells the story of this remarkable woman, her books and her family. The Agnes Keith house is open daily from 9.00am to 5.00pm. For further information, please contact The Agnes Keith House at 089 221140. 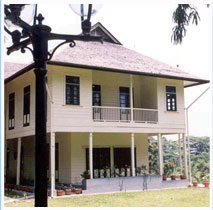 Established in 1964 with more than 4,500 hectares of virgin jungle, the Sepilok Rehabilitation Centre is designated area of forest reserve and sanctuary the Orang Utan (Pongo Pygmaeus). With genes that are 96.4% similar to humans’, it will be easy and fascinating to see that the adorable creatures behave in a human-like way. Get your cameras ready at feeding times (10.00am and 2.00pm) and wait with the keepers, who sit on the feeding platform with bananas and milk, and the Orang Utans should soon make an appearance. More often than not they appear, some of them unfazed and even loving the attention, while others are more wary of their human visitors. The Orang Utans here in Sepilok are rescued from logging sites, plantations and illegal hunting. When they have learnt the necessary skills for survival in the wild, they are then set free into their natural habitats in the Borneon rainforests. When you come to Sandakan, make the Sepilok Rehabilitation Centre a definite stop to meet Sabah’s wild sweethearts!

Simud Hitam and Simud Putih are the two caves that make up the intricate cave system inside Gomantong Hill. Simud Hitam is the more accessible of the two, just minutes’ walk away from the entrance to the caves. The ceiling of Simud Hitam 90 metres above ground hold the ‘black saliva’ nests of the swiftles who live in these caves. Simud Putih is a little harder to access and requires special permission for admittance. It is here where the more valuable ‘white saliva’ nests are found, the main entrance of which is a further 90 metres above Simud Hitam. Watching the licensed and expert locals risk their lives climbing up flimsy rattan ladders, ropes and bamboo poles to collect the precious commodity is a vexing experience; nevertheless, drop by the caves for an exceptional adventure! Arrange your visit to the caves with a tour operator. 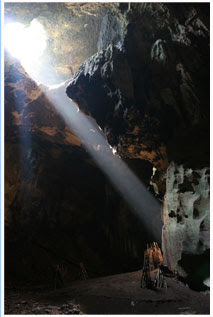 When you are in the Sandakan vicinity, make sure you head out to the Kinabatangan Wildlife Sanctuary in the Sukau area. It will be one river safari you will never forget, and have you longing to come back for more. Within the 26, 103 hectares live a great variety of flora and fauna endemic to Borneo and the area itself. A recorded 1000 plant species, 250 bird species, 90 fish species and reptilia and 50 mammal species live in this small area. Be very excited - whether on your day or night safari, you will have the chance of sighting animals like the Borneo Pygmy Elephant, Orang Utans, proboscis monkeys, silver leaf languors, macaques, civet cats, snakes, estuarine crocodiles and wild boars. Look above to spot hornbills, Wallace’s Hawk-Eagle, the Violet Cuckoo, the Blue-eared Kingfisher, and the Grey-headed Fish-Eagle to name a few. To visit the Sukau area is not just a feast for the eyes, it is a valuable experience that will open your eyes to the importance of conservation of the ecosystem that is home to precious wildlife. 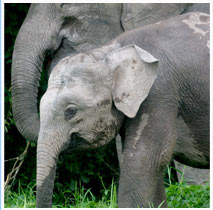 In the centre of the mangrove forests of Sumawang is the Labuk Bay Proboscis Monkey Sanctuary, where you can see Borneo's indigenous proboscis monkeys. This privately-owned sanctuary located within an oil palm estate gives you the chance to observe these animals up close and personal. The remarkable males sport big dangling noses, reddish flat-top hairstyles, white tails and markings, and pot bellies. The females on the other hand, are much smaller and have up-turned noses. Check out their website at www.proboscis.cc to take a peek into the world of the Labuk Bay Proboscis Monkey Sanctuary where you will spot these and other fascinating creatures found there! 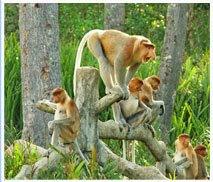 Officially opened on 15th February 1999, the Sandakan War Memorial is located on the original Prisoners of War camp set up during the Second World War Japanese occupation in 1942-1945. An official Anzac Day Ceremony is held here every year in memory of the Australian, British and New Zealanders who suffered and died in this area. A pavilion dedicated to the prisoners of war who spent their last days at the camp and wall-mounted displays documenting the lives of the prisoners as well as the Sandakan Death March make this memorial a place worth visiting. The park is located at Mile 8 of Jalan Labuk Utara and is open daily from 9.00am to 5.00pm.

Check out the coffins buried in the limestone cliffs by the mystical Orang Sungai at Batu Tulug and explore the three caves located within the limestone formations. 14 dive sites are waiting for you surrounding the Lankayan Islands off the coast of Sandakan where undersea life like ribbon eels, whale sharks and green and hawksbill turtles wander and swim. Get away to a secluded paradise island called Pulau Libaran and walk along its beach and enjoy its stunning sunset come late evening.

After you visit the Sepilok Rehabilitation Centre, drop in to the nearby Rainforest Discovery Centre where a myriad of the most beautiful plants and flowers can be seen. Why not take in the pleasures of Sandakan town at your own pace and learn of its history and culture on the Sandakan Heritage Trail. Visit one of the oldest buildings in Sandakan, the St. Michael’s and All Angels Church where you will find the exceptional stained glass windows, donated by Australians to commemorate the 60th Anniversary of the end of World War II.