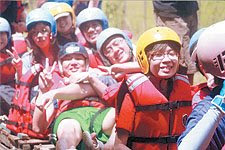 The crew are all professionals yet first-timers 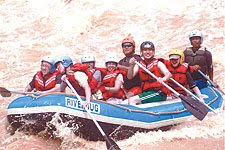 Rafters braving the waters are later shown on video 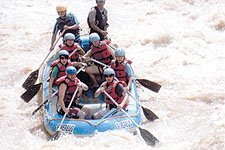 An alternative way to celebrate Gawai Festival is to go water rafting in Padas River, Kota Kinabalu, Sabah. It is an experience that can be enjoyed by the whole family or a group of friends in search of an adventure.

It starts with a bus transporting the "rafters" from the Marina Court.

The guide was funny and made everybody comfortable while discussing the safety procedures of water rafting inside the bus. He even joked around that they are professionals yet it's their first time to guide others. Nervous laughter can be heard.

Common idea among the "rafters" is how they have gotten into such a situation and how they get out at the first traffic light, from the bus and the people who are going to take care of them.

Three hours of uneventful trip is enough to convince the first-timers that the guides were just kidding after all. Beautiful sceneries can be seen from the virgin forests.

During the ride, papers went flying and signatures were gathered for insurance and for the "no photo policy in the dam".

A quick stopover to buy refreshments allowed the group to stretch a little before they arrive at Beaufort Town.

From Tenom to Pangi, Beaufort Railway Station primitive carts or trolleys used. Fondly called "Flintstones Ride", they were driven by labour, usually two people holding a long stick to push or to stop the cart.

Another hour passed by to reach the destination. Huge rocks and raging river could be seen from the ride. Never before seen insects could be sighted from the "townies' point of view".

You would be lucky if the unknown species doesn't take a souvenir from you, but what the heck, its always part of the ride.

Watermelons and bananas were served when the rafters arrive. Quick and light fruits to give an energy boost before facing the wild rapids.

Another briefing was given but more specific this time, about the do's and don'ts of water rafting. Again they joked about how their crew were all professionals yet they are first-timers as well.

One thing they kept on reminding us was to never forget to put on a smile even when thrown off the river since there will always be a camera lurking!

A raft can carry four to six person. Usually men are seated in front. Strong arms are needed to paddle the boat. All of the seven boats have one or two captains guiding the 'rafters'. It's their call when it's time to paddle easy, hard or relax.

Four rapids called Head Hunters, Scooby Doo, Cobra and Lambada needed to be faced before one can touch lunch. Over calm waters, people are encouraged to take a dip. It doesn't matter if you can't swim; you are still going to be pushed to enjoy the waters. You will stay afloat thanks to the vest.

During lunch, they showed video of the rafters braving the waters. It seemed real that one really did go through the rapids.

With energy regained, the rafters completed two more rapids, The Curve and Body Rafting. But this time, a calmer water was seen. Boats were being pulled. A buccaneer from another boat came and pulled the women first into the waiting waters. It is no use going back to the boat, as you will be pushed.

At Halogilat, where the rafters finished the 9km distance, speedboats were waiting to bring the now exhausted rafters back to Tenom to get their things, have a quick shower and change into dry clothes.

Now, wearing the Paddle or Die shirt, it's good to show the world that I have been there and yes, I survived!

Courtesy of Borneo Bulletin Sunday
Posted by e-borneo.com at 9:26 PM