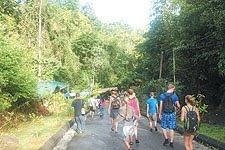 Breathtaking view of the nature reserve 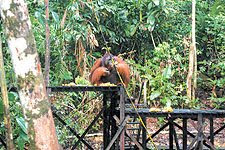 Star of the show, Ritchie

The figure makes it one of the most popular nature reserves in Sarawak, while other close to the state capital like Bako National Park trailed with about 30,000 over the same period.

"We are very satisfied with the statistics (arrivals) in the last three years, which averaged 66,000 visitors," said Jen Sangel, the manager of Semenggoh Wildlife Centre.

I think we have more or less reached the pinnacle (in terms of visitors arrivals) and we do not project significant gains for the near future. European visitors topped the list with more than 19,000 in 2007 (United Kingdom leading with 5,300 people) followed by Australians and New Zealanders with 3,997 visitors.

A total of 5,209 Asian tourist from outside Malaysia also visited the wildlife centre. While more than 37,000 were Malaysians, west Malaysians accounted for 26,000 with only 12,000 from Sarawak.

"It's mostly semenanjung people who visit the park. There are slightly more locals (from Kuching) during the school holidays. Overall its 50-50 between locals and foreign visitors," Jen said.

The park records an annual turnover of more than RM130,000 from tickets sales, of which about RM50,000 is spent on animal feed.

The status of Semenggoh Forest Reserve, Sarawak's oldest forest reserve (constituted in 1920), had been changed in April 2000 to that of Semenggoh Nature Reserve. The Reserve has been an important site for Sarawak Forest Department experimental studies and houses an arboretum, a wildlife rehabilitation centre, a botanical research centre, trial plantation and experimental plots, forest nursery and the former Forest School.

The undisturbed primary forest contains probably the richest flora in the world. The palm Areca ahmadeii is endemic to the reserve.

The Nature Reserve houses various rare flora and fauna. It is known to be inhabited by large variety of birds, of which most are migrants. Birds present include the bulbuls, babblers, barbets, kingfishers, shamas, drongos, pigeons, woodpeckers and tailorbirds.

The Giant Squirrel and Pigmy squirrel are also found here. The presence of gibbons are due to the rehabilitation programmes conducted there.

Semenggoh Nature reserve is one of the five nature reserve, four wildlife sanctuaries and 19 national parks under the Sarawak Forestry Corporation (SFC). SFC is in the midst of gathering new areas in the state, while other like the Bako national park are slated for expansion.

Orang Utans are totally protected animals under Sarawak's Wild Life Protection Ordinance 1998. Any person found hunting, killing, capturing, selling, offer for sale, importing, exporting or be in procession of any trophy or flesh of the Orang Utan shall be guilty of an offence and shall on conviction be liable to a term of imprisonment of two years and a fine of RM30,000.

Because of hunting and trapping their very existence is threatened in Sarawak, with each passing year, there are fewer and fewer Orang Utans in our forests; they have been given special protection because they are most severely threatened. It's star attraction at the reserve is "Ritchie" a male Orang Utan popularly referred to as "the boss", others include "Annuar", "Edwin" and "Delima".

For over 20 years, the wardens here trained young Orang Utans, who had been orphaned or rescued from captivity, on how to survive in the wild. The success of this programme has left the surrounding forest reserve with a thriving population of healthy adolescent and young adult Orang Utans, who are now breeding in the wild.

The programme has been transferred to the Matang Wildlife Centre, but Semenggoh is still home to its successful graduates, semi-wild Orang Utans and their babies. They spend most of their time roaming the forest but frequently come back to the centre for a free meal.

During the fruiting season in the forest, some or even all of them may not come back to feed. This itself is a good sign and another step closer to full rehabilitation.

Courtesy of Borneo Bulletin Sunday
Posted by e-borneo.com at 9:19 PM