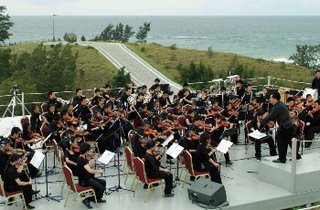 NO STOPPING US NOW: The orchestra playing under the windy condition as the sun sets and the moon rises.

It was the 100-person ensemble’s second performance at the venue, playing under the setting sun as well as the rising moon. This year’s event was special, as the rising moon, also known as the Flower Moon, was believed to be at its best in 19 years.

Despite strong winds and the cloudy skies having obscured the view of the setting sun and the rising moon, the ensemble enthusiastically played classics such as "Dengarlah Sang Ombak Berdesir" from P. Ramlee's film Penarik Beca.