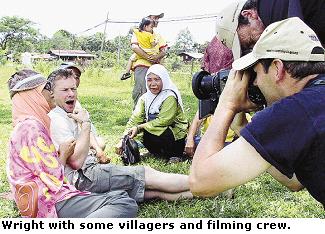 KOTA BELUD: Man-about-the-world Ian Wright stole the hearts of many, including those who didn’t know who he was, during a film shoot in Kampung Pirasan, here, over the weekend.

The travel show host attended a wedding — where he presented the newlyweds with a goat, had lunch in a local restaurant, checked out some buffaloes and even tried ninggat, a concoction of betelnut and areca leaves.

Wright, of Discovery Travel and Living’s Globe Trekker, arrived in Sabah on Saturday.

Since last week, the Globe Trekker crew has been filming popular spots in Malacca, Penang and Langkawi.

They will film orang utan and Mount Kinabalu before moving on to another State by the end of the week.

Sabah Tourism Board assistant communications manager Hezrina Ibrahim said the Briton, with his trademark plaid shirt and jeans, had been a crowd puller with his easy-going charm.

"This is his first visit to Sabah, but Globe Trekker has been here before," she said.

Hezrina said most of Wright’s scenes were spontaneous, especially when he mingled with children and villagers, or when he tried the ninggat.
Content & Photo Copyright to and Courtesy of New Straits Times