Sabah Harvest Festival with all the trimmings 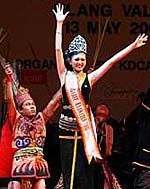 Tati Susanna was one of the heroines in a play by
ERA Budaya Papar. Copyright © 2006 The Star.

THE phrase Kotobian Tadau Tagazo Kaamatan, a traditional blessing, was heard throughout the day during the Harvest Festival celebration at Flamingo Hotel in Kuala Lumpur on May 13.

The Kadazandusun Kaamatan festival, or better known as the Harvest Festival, is one the most celebrated festivals in Sabah.

The festival is particularly significant as it marks the occasion to honour “Bambarayon'' (the spirit of rice) and to thank god for the successful harvesting of their crops.

It is also an occasion where friendship and brotherhood is renewed through mutual forgiveness in the activities held during the festival.

The ritual is actually a traditional dance performed to bring home the lost, stolen or stray bambaazons, which are rice spirits.

The ceremony included performances by Kadazan artistes like the Kinabalu Kings as well as sketches by ERA Budaya Papar, a theatre troupe from Kota Kinabalu.

The sketches were all based on Kadazan folklore and represent significant aspects of the Kadazan lifestyle.

There were also game booths where guests were invited to participate in traditional Kadazan games like finger wrestling, arm wrestling as well as blowpipe competition.

Throughout the performances, the Kadazandusun Cultural Association Klang Valley also conducted their annual Unduk Ngadau competition, which is a beauty pageant open to all Kadazan girls.

The girls in the pageant were judged on their appearance, costume and presentation.