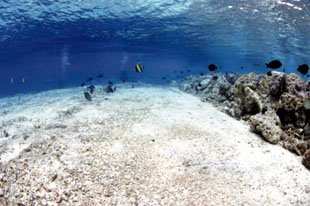 A photo which shows a section of the damaged coral 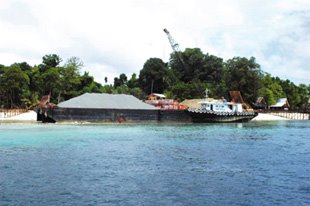 The steel barge is anchored at the island’s dropoff point.

Kah Kiat said the contractor who is putting up some basic facilities on the island was authorised to use boats (kumpit) to transfer building materials like cement and sand to the island but the use of barge was never allowed.

“This is an abuse of nature. We want to get to the bottom of the matter and the culprits must be punished,” he added.

Expressing grave concern, Kah Kiat who is also Tourism, Culture and Environment Minister said he has been informed that some corals had been damaged by the barge.

“The damage is said to be substantial and as a result, we may even have to consider closing the island indefinitely to let the island rest and regenerate,” he said.

FiNS Magazine associate editors Andrea & Antonella Ferrari took pictures of the barge and damaged corals while they were diving at Sipadan on Tuesday and posted them on the Internet.

They claimed that in the process of being beached, the barge’s flat steel hull wiped away corals like a giant knife slicing through butter, leaving in its wake hundreds of square metres of unnaturally flat limestone and a veritable wall of coral.

Both Andrew and his wife Antonella said the damage was incalculable.

“I can only hope nature will be able to mend this terrifying gash but it will surely take decades or hundreds of years,” Andrea said.

He said as a passionate diver and environmentalist and an undisputed lover of Malaysia’s natural heritage, he wondered why the enormous barge was allowed to anchor at Sipadan. - CBH