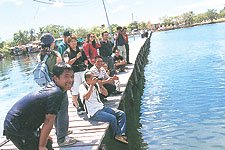 Media personnel and officials from Tourism Malaysia
enjoying a view of the village from a wooden bridge. 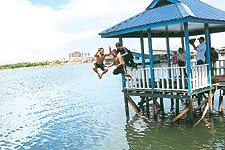 Boys jumping into the water during
bath-time at Labuan's Water Village. 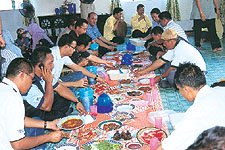 Media personnel and guests having a
Malay-style lunch at Kg Patau-Patau 2. 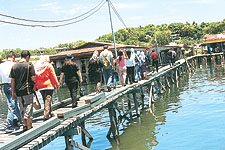 I recently got the opportunity to visit for the first time Kampung Patau-Patau 2, which is popularly known as Labuan's Water Village.

It is not as large as Brunei's Water Village but it boasts the unique cultural heritage of the Brunei Malays. Their daily life is similar to that of Kampung Ayer in Brunei. A majority of the residents of Kampung Patau-Patau 2 are Brunei Malays who still have very close family ties with the Malay community in Brunei.

Kampung Patau-Patau 2 is provided with pipe water, electricity, telephone lines and other facilities. There are also mosques, schools and canteens in the villages.

A majority of the villagers still depend on fishing to earn a living, especially the older generation. The younger people mostly work elsewhere and some even hold important positions in the government and private sectors.

But what surprised me and the other Mega FAM guests was that the surrounding waters were very clean and free of floating household rubbish. The water was calm and quite free of water-taxi boats.

We saw young children jumping into the water to take their bath. Walking along the wooden bridge that links the "mainland" to the village, we saw fishing boats and people repairing their fishing nets in the corridors of their houses.

Our arrival at the parking lot of the village was greeted with a Malay traditional welcome - the beating of "Hadrah" and "Bunga Rampai".

Seven of the houses in the village are involved in a "Homestay" programme, which is run by the Ministry of Tourism Malaysia with the cooperation of Fishermen Development Authority to promote eco-tourism.

Awg. Adillah said since the programme was introduced, Kampung Patau-Patau 2 had received an overwhelming response not only from domestic visitors such as from Sabah and West Malaysia but also foreign tourists such as from Japan, Korea, China, Thailand and Indonesia.

Under the programme, the tourists experience the daily life of fishermen. The activities arranged include fish processing, making of salted fish, catching crabs and cooking a fresh catch for lunch or dinner.

The visit was one of the media activities held in conjunction with the Labuan International Sea Challenge 2006. The media were invited by Tourism Malaysia.

Email ThisBlogThis!Share to TwitterShare to FacebookShare to Pinterest
Labels: Labuan