Miri owes a lot to the “Grand Old Lady" 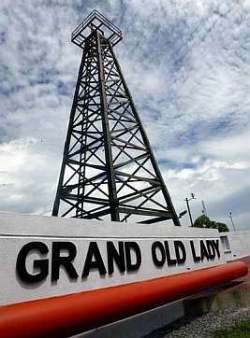 PROUD LANDMARK: Although she was built in 1910,
the Grand Old Lady of Miri is still standing tall today.
Bernamapic © Bernama

MIRI: She stands majestically perched on top of Bukit Telaga Minyak, better known among the locals as Canada Hill, overlooking this town and the rapid development which had taken place over the last 96 years.

Dubbed the “Grand Old Lady,” she is not a frail figure of an old woman but Miri’s Number 1 oil well, the first cable tool oil well in the country.

Since 1910, the Grand Old Lady had witnessed various historic and physical developments in this oil-rich town, which now is not only known for the “black gold” but also its attractive tourism industry.

It is believed that this well produced the first oil found in the country on Dec 22, 1910 and continued pumping out the precious commodity for the next 62 years producing 658,650 barrels of oil before it was closed on Oct 31, 1972.

Due to its sentimental value, the Sarawak government on July 10, 1985, restored the Grand Old Lady and accorded her status as one of the state’s important historical monuments.

The Grand Old Lady dates back to the late 1800s when the then Baram Resident, Claude Champion de Crespigny discovered there was oil in the Baram region.

Centuries before he noted this, the indigenous people living in and around Baram region had been using the oil as fuel, calling it minyak tanah.

In 1888, Charles Hose who took over as the subsequent Baram Resident continued Crespigny’s work and before retiring, Hose did another intensive study about the presence of oil there.

Soon after retiring, Hose requested permission from the then Sarawak White Rajah Sir James Brooke to present his studies to the AngloSaxon Petroleum Company in London.

In 1909, Hose returned to Miri, this time bringing along geologist, Dr Josef Erb, and after a series of studies the expert was convinced that the Baram region including areas surrounding Miri was rich in oil.

Dr Erb then decided to build an oil well on top of the hill and a Canadian, by the name of McAlpine, was assigned to erect the well. The hill was named Canada Hill, honouring his contribution.

Due to the sentimental value of the Grand Old Lady to Miri, a Petroleum Museum was built next to it and the name Canada Hill was changed to Bukit Telaga Minyak in 2005.

The museum was opened on May 20, last year by Chief Minister Tan Sri Abdul Taib Mahmud, and the opening coincided with Miri being accorded city status.