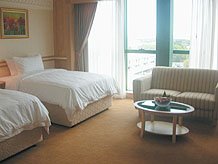 "Being right in the heart of Gadong is the strength of this jewel. However, the plus point of the five-star hotel is the grandeur of its interior, state of the art technology of its function, meeting room and ballroom which can cater more than 1,000 guests in one seating in a banquet," said its General Manager, Muhammad Irwan Goh, in an interview with the Bulletin.

"Opened for business on May 1, the hotel, which employs some 85 to 90 per cent locals, is furnished with LCD television and DVD players in every room of the eight-floor hotel. The grand deluxe room has two bathrooms. There are also five Duplex suites priced at $1,700 with two floors and two separate bedrooms.

Executive Club, the biggest in town, houses two floors. A dome on the eighth floor is suitable for private gathering including barbecue. A lot of attention has also been paid to the room's door design, he added.

Muhd Irwan, who has a vast experience in the hotel industry having worked in this line for 24 years including 2 years at Berjaya Lemome beach resort hotel in Mauritius, 10 years in Singapore including Dynasty (now Marriot hotel) and Oriental and countless hotels in Malaysia, shared his view on how to market this hotel.

"Of course, it's a different clientele, operation methods, and marketing concept. It's a challenge to position the hotel, considering Brunei's budding tourism industry. To really go into leisure market is a challenge.

"But we position ourselves and focus on meeting and international convention and exhibition (MICE) market, noting that July is a busy period for the hotel. Brunei is a good destination for MICE and incentives."

From deluxe to presidential suites, the hotel also has executive club floor on the 7th and 8th floors. Suites namely premier, ambassadors and presidential are on the 8th floor.

Being a member of a club means guests are entitled to a host of amenities including evening mocktails, complimentary laundry and other value added services.

The presidential suite is priced at $3,500. Currently, the hotel has a promotion for deluxe, grand deluxe and executive deluxe, one bedroom and two bedroom suites.

During the promotion, which the hotel is offering till the end of August, the discount is 50 per cent, ranging from as low as $150 per room per night with breakfast for two persons.

Asked his view on the country's hotel occupancy rate, Muhd Irwan said it will be maintained at 30 to 35 per cent this year and next year and doesn't think that it will go beyond that.

Courtesy of Borneo Bulletin
Posted by e-borneo.com at 4:30 PM