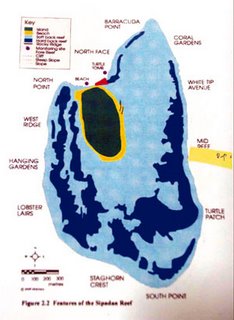 KOTA KINABALU: The contractor appointed to put up basic facilities on Pulau Sipadan has admitted damaging the corals at this world famous dive island.

Kumpulan Surati Sdn Bhd has apologised and will take full responsibility for the coral damage.

The company admitted that it was in the wrong after being summoned by Sabah Parks to explain why it had used a steel barge to bring building materials to the island when it was only allowed to use a boat (kumpit).

He said the contractor applied to Sabah Parks to use a 33-horsepower boat to transport building materials to the island and it was approved.

“But they instead used the barge without telling us,” he quipped.

FiNS Magazine associate editors Andrew and Antonella Ferrari took pictures of the steel barge and damaged corals when they were diving in Sipagan about a week ago and posted them on the Internet.

They said that in the process of being beached, the steel hull of the barge had wiped away corals like a giant knife slicing through butter, leaving in its wake hundreds of square metres of unnaturally flat limestone and a veritable wall of corals.

Kah Kiat who is also Tourism, Culture and Environment Minister said the damage to the corals was minimum and that the area affected was only 3,984 sq ft, contrary to what was reported by the international media.

A group of divers led by Sabah Parks’ deputy director Dr Jamilis Nais was at the island last week to assess the damage.

“The damage was not substantial as reported. It was only about 0.1 per cent of the 208-ha island which has 12 principal diving spots,” he said

But, he said damage has been done even though it was minimal and the contractor must be held responsible.

“And, they would be asked to pay for the work to clean up the damaged area to be undertaken by Sabah Parks,” he added.

According to Kah Kiat, Sabah Parks initiated the project to build toilets, resting place as well as proper sewerage and sanitation system on Sipadan in pursuant of an instruction by the Joint Committee of Management and Supervisory of Sipadan in August last year.

“It was not the State Finance Ministry’s project,” he said.

Last week, the Chief Minister had ordered a full probe on the Sipadan incident.

Kah Kiat also said the project on the island would be suspended pending a review of the scope of work as instructed by the Chief Minister .

“He also wanted to minimise the use of heavy materials,” Kah Kiat added.

Meanwhile, Kah Kiat said the Joint Committee which involved both the state and federal government would meet after June 7 to discuss the future of the island.

“I also had a meeting with the Chief Secretary to the Federal Government and Federal Attorney General in Kuala Lumpur recently regarding the island,” he said.
Courtesy of New Sabah Times