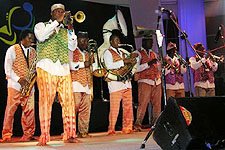 MIRI - Sarawak's inaugural Miri International Jazz Festival at the Pavilion was described as one of the most enjoyable experiences, showcasing the best of international musicians - a rewarding effort of the Sarawak Tourism Board.

"It is only in Miri that you can see this set of standard for a new genre of music, the type of crowd and enthusiasm because of the city's cosmopolitan charm and warm intimate settings," said Sarawak Deputy Chief Minister Tan Sri Dr George Chan, who was among the crowd on the second night.

He said the spirit of the audience was a testament to the vibrancy of life that makes up Miri today.

"Inspiring by notable jazz bands in this festival, who won't not tap their feet or dancing on the floor to the international exponents of jazz musicians," he said, pointing to the dancing crowd and partakers of food stalls and entertainment by the seabeach.

"This is what Miri can offer to locals and expatriate here, foreign tourists, visitors from neighbouring Brunei Darussalam, Sabah and Labuan, especially the expatriate communities living in these Borneo territories."

Dr Chan said the festival is for the people to enjoy the sensation of exceptional musicians, also as a tourism product for Sarawak that will be included in the annual calendar event.
Courtesy of Borneo Bulletin
Posted by e-borneo.com at 3:18 PM