Charms of the 'Land Below the Wind' 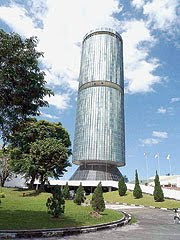 The Sabah Foundation Building is a magnificent glass-shrouded tower of 72 sides rising 30 storeys into the sky, dominating the landscape. It is located at Likas Bay, about 10 minutes drive from Kota Kinabalu, and is a must on any visitor's itinerary. This proud, building is a symbol of Sabah's dynamic, innovative spirit. 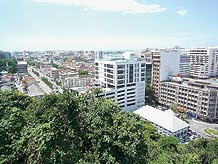 KK as seen from Signal Hill. 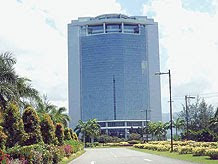 One of the government buildings in KK. 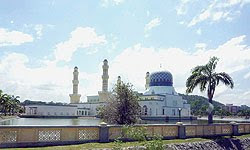 A mosque in KK. 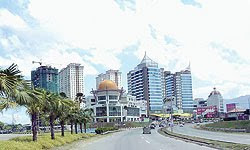 The latest shopping complex in KK.

Kota Kinabalu formerly known as Jesselton, is the capital of Sabah, a state of Malaysia in the east coast.

The city is well known for its tourism attraction worldwide and is home to the highest mountain in the island of Borneo.

Sabah, affectionately known as 'Land Below the Wind', has been a favourite holiday destination for Bruneians because it is a safe place with relatively low crime rate.

It is also a modern city with well-planned development and proper network of roads. The city also has plenty of shopping destinations.

It is now a hub of AirAsia - the world's best low-cost airline and Bruneians usually stop over in KK to catch flights to places like Manila and Shenzhen among others.

Furthermore Brunei-Malay descendents live in certain areas from Sipitang to KK. Bruneians can trace their families in these areas.

Come December, the season when students have their one-month final term break, many Bruneians choose to visit KK, which is easily accessible by cars.

The only problem is the accommodation as all hotels are usually fully booked due to the influx of tourists and Bruneians visiting the state.

Even rented condominiums and seaside chalets located far from town will be rented by Bruneians if they fail to find accommodation in the city centre.

Regular travellers will notice a significant improvement and rapid changes in the city as multi-ethnic communities settle in the state and make it their second home.

The multi-diversity of its ethnic people from the local natives such as the Kadazan, Dusun, Bajau and Rungus to non-locals like the Malay, Chinese and small groups of Indian races provided a new meaning in this city.

The most attractive local attraction is the Kaamatan Festival that is mostly held at the end of May every year.

Tourists and locals were given the opportunity to learn more about the local native heritages and at the same time, to experience their way of life.

The coastal beach line is the best place for tourists to watch the sunset and enjoy the warm breeze.

Sutera Harbour is also a hotel resort built out from a re-claimed space at the sea and is one of the most exclusive hotels in Kota Kinabalu.

The need to develop re-claimed land is due to the location of the town, which is situated next to a hill range that barricades the coastline and is a natural barrier against the high windstorm.
Courtesy of Borneo Bulletin
.
.
Posted by e-borneo.com at 6:06 PM

Email ThisBlogThis!Share to TwitterShare to FacebookShare to Pinterest
Labels: Land Below The Wind, Sabah Tourism